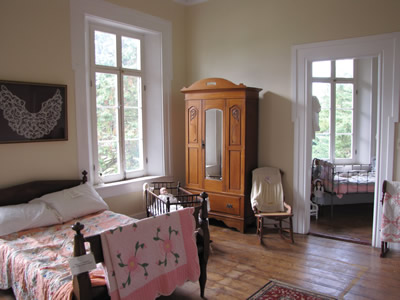 Loren Andrus came from New York to Washington as a youth with his parents in 1828. At the age of 21 he was employed as a surveyor of the Clinton and Kalamazoo Canal and later worked on the railroad from Port Huron to Flint. In 1841, Loren married Lucina Davis, who had also come with her parents from New York and settled in the area.

Loren Andrus, with the help of his brother-in-law David Stewart, and using Fowler’s book, A Home For All as a guide, began building his Octagon House in 1858. Most of the material for construction of the home was acquired from his surrounding farmland. Known as the house of eights, the Octagon House was completed in 1860.

The house was an active place for social events. Loren and Lucina’s eight children entertained friends and family with dances, games, taffy pulls and songs around the piano. Lucina died in 1890. Four years later Loren sold his beloved Octagon House and moved to Detroit to live with his daughter.

Many owned the house between 1894 and 1987. It has been a farm, restaurant, educational site for Wayne State University, living history farm and lastly a historic home museum.

In 1971 the Octagon House was listed on the National Register of Historical Places and in 1972 recognized as a State of Michigan Historic site.